Nine miles north of Santa Cruz, Davenport’s coastline is carpeted with strawberry and artichoke fields and includes sweeping vistas of the Pacific Ocean. Migrating gray and humpback whales pass by every year, while sea otters, dolphins, blue whales, porpoises, sea lions, and a variety of ocean birds can also be spotted. The North Coast provides easy access to miles of trails and exposed beaches.

Waddell Beach is known internationally as one of the best spots for windsurfing because of the ever-present winds out of the North West.  At low tide, scour the more secluded beaches of Davenport for rare sea glass shards, softened by waves and wind. At Rancho del Oso State Park, watch kiteboarders catch air off the waves at Waddell Beach, walk along a rare coastal freshwater marsh, or hike or ride inland along forested canyons. At Wilder Ranch State Park, wetland and riparian habitats thrive, among thirty-four miles of trails for hiking and mountain biking along the ocean bluffs or up grassy terraces. As a result of a restoration project, wetland and riparian habitats thrive, attracting birds to what was once agricultural land.  Thirty-four miles of trails offer hiking along the ocean bluffs or up grassy terraces, challenging mountain biking routes, and vast expanses of beaches. The park’s historic Meder farmhouse has been restored to its early 1900s grandeur with appropriate replica furnishings and interpretive supplies.

Between Wilder Ranch and Rancho del Oso, hidden sea arches and rock formations are nestled along the coast.  Smaller, lesser-known sun spots like Hole in the Wall and Panther Beach – which rise out of nowhere when the fog lifts – are havens where surfers, whale watchers, swimmers, and sunbathers all share the sun and sand. The Davenport Jail, a one-room, two-cell built in 1914 is on the National Register of Historic Places. It is now a museum which houses natural and historic artifacts from the north coast.  Hungry for more? The Whale City Bakery is a North Coast institution, featuring a boutique bakery with vegan and gluten-free options (try the Chocolate Dipped Peanut Butter Cookie!). Or visit a coastal u-pick farm, where you can harvest your own strawberries, ollalieberries and kiwi fruit.

Up the coast of Santa Cruz County is a place that goes beyond your wildest dreams: Shark Fin Cove. Carved away from the cliffs by wind and waves, an island shaped like a shark’s dorsal fin juts out of the water just beyond the shore of the secluded beach.

Just north of Santa Cruz is a vast expanse of coast that runs along Highway 1, dotted with stunning beaches perfect for sunbathing, surfing, tide-pooling, or enjoying a beach day. Each one of these locations features soaring cliffs overlooking the Pacific Ocean and sandy beaches you must see to believe.

People love Wilder Ranch State Park. Hikers and mountain bikers come from all over to explore its 34 miles of trail winding through oak-crowned meadows and redwood ravines and to gape at its stupendous views of Monterey Bay. But many visitors also come to savor the gentler charms of the old farm complex. 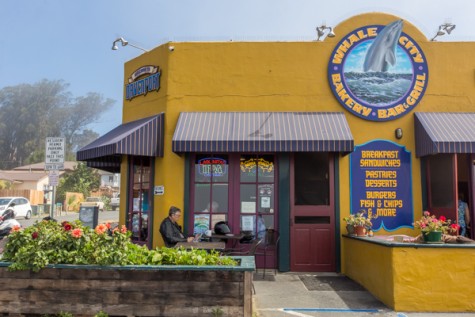 What was once a roadside gas station and market is now a central hub for hungry visitors. Grab a seat inside the atmospheric dining room with exposed rafters or outside on the coveted front patio with peeks of the ocean beyond. Just save room for ice cream or a pastry from their bakery counter. 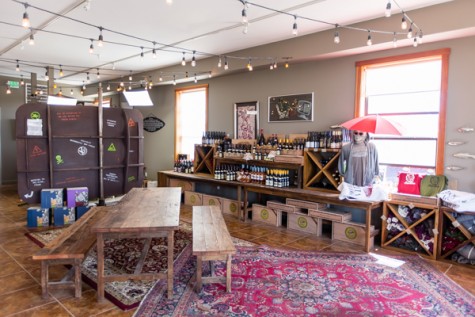 Winemaker Randall Grahm is one of Santa Cruz’s beloved eccentric characters. His whimsical nature is immediately apparent when you step foot inside the new tasting room for his winery. Metallic fish, glowing ray guns and alien masks festoon the playful interior. You can even take your picture in a retro space rocket! The wide selection of wines and ciders are, ahem, out of this world too. 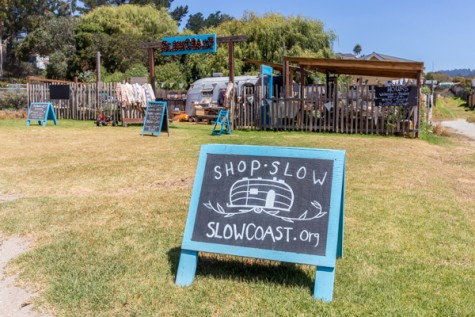 Don’t miss this contemporary general store located in — and around — a 1954 Airstream trailer.  It’s a browser’s paradise with foods and goods made by artisans from the “slowcoast,” the pristine stretch of land between Half Moon Bay to Davenport. 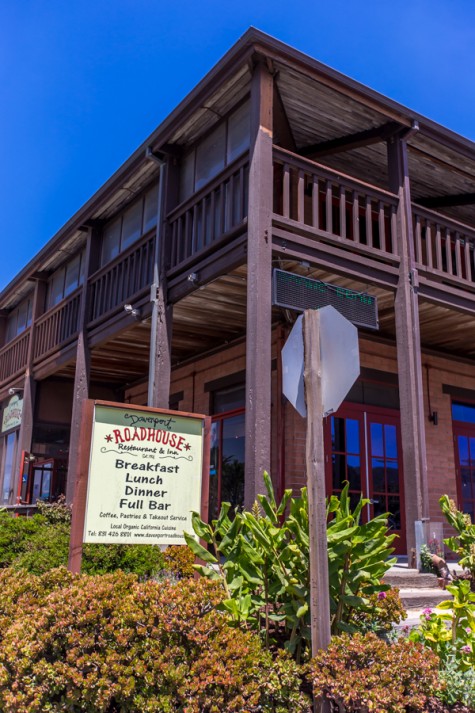 This is a convivial, all-day eatery housed in the Davenport Cash Store, built in 1977 after the original 1906 structure burned down. The restaurant draws both visitors and a tight community of locals who gather for local dishes and weekly live music. Don’t feel like driving? Upstairs, you’ll find a handful of guest rooms with views of the crashing surf across Highway 1. 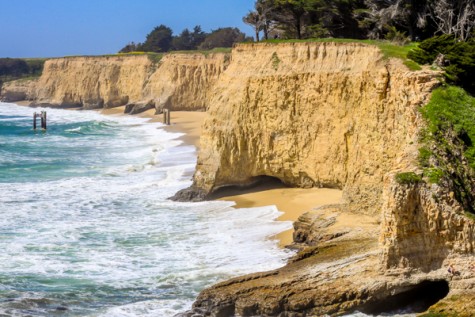 Immediately across the road from Davenport’s eateries are its picturesque coastal bluffs. Explore the grassy terraces via a trail that winds along the edge with knock-out views of the Pacific. Peer to the north and you’ll spy the remains of an old pier rising from the surf. 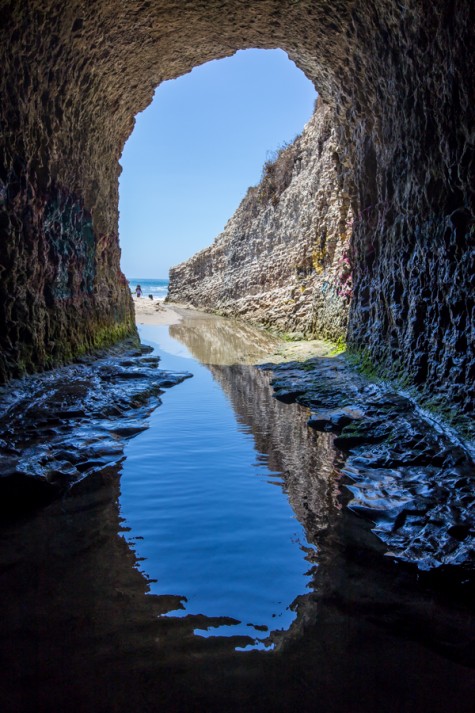 From the bluffs, meander down a dirt path to this wide, scenic beach hidden from view of the road above. Towering, soft stone cliffs rise above the expansive beach, lending it an air of seclusion. When the tide is up, you’ll marvel at waves exploding against a slender sea stack nicknamed Shark’s Tooth. Seek out an enchanting tunnel, blasted from the cliffside rock in order to carry the San Vicente Creek out to shore. Bring water shoes and follow the dim passageway to the other side for a Goonies style adventure! 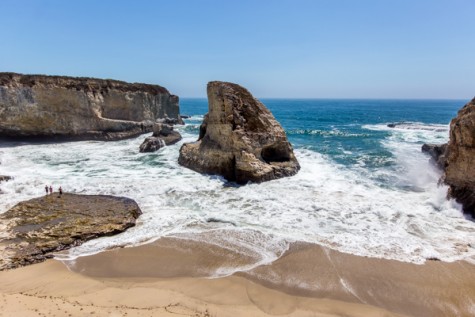 Only a glimpse of this beach’s striking beauty is visible from the road. As you inch down a dirt path towards the sand, the wow factor gets dialed up pretty quickly. The secluded beach cove could be the setting for some exotic movie locale. Its star is a massive sea stack that sits just offshore and is named for its resemblance to a shark’s dorsal fin. 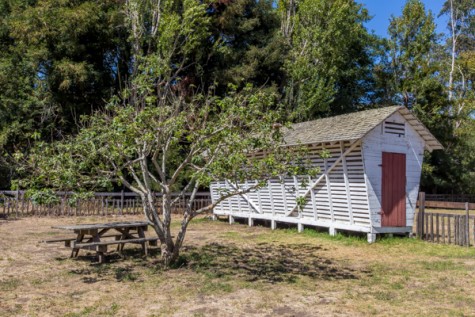 Wilder Ranch is an amazing find, hidden just off Highway 1. The historic property sports beautiful charming old ranch structures, vintage machinery, a 19th century adobe home and a stunning Victorian farmhouse. Little ones can marvel at chickens, goats and horses and frolic in passageways created by overgrown clusters of succulents. The park covers a whopping 7,000 acres but most visitors are content to visit the Cultural Preserve area and stroll the seaside Old Cove Landing Trail. An informative visitors center lends a proper introduction to the history of the ranch and its surroundings.