Where to Catch the Best Winter Sunsets

It’s a scientific fact that sunsets are simply better in the winter. The colors are more vivid, the clouds sweep dramatically overhead like a painter’s bold brushstrokes, and in Santa Cruz where the ocean faces south, the bright yellow orb’s descent beneath the horizon is finally visible from almost any beach in the county. Even if it means skipping out on work early (although you didn’t hear that from us), winter sunsets are just too good to miss.

There are so many picturesque spots to capture the sun’s last rays in Santa Cruz but we’ve rounded up some of the very best. Don’t forget to pack your camera! 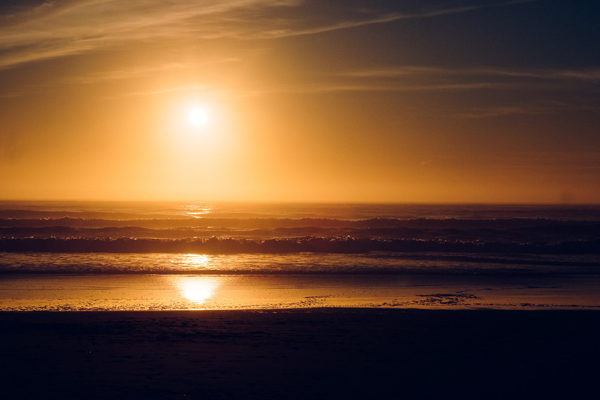 The beaches in Aptos, on the eastside of Santa Cruz County, stretch for miles and provide some of the widest views of the bay. Pack your tennis shoes and take a long run along the edge of the surf or just pack a hot thermos of tea and a blanket and hunker down to watch the show. 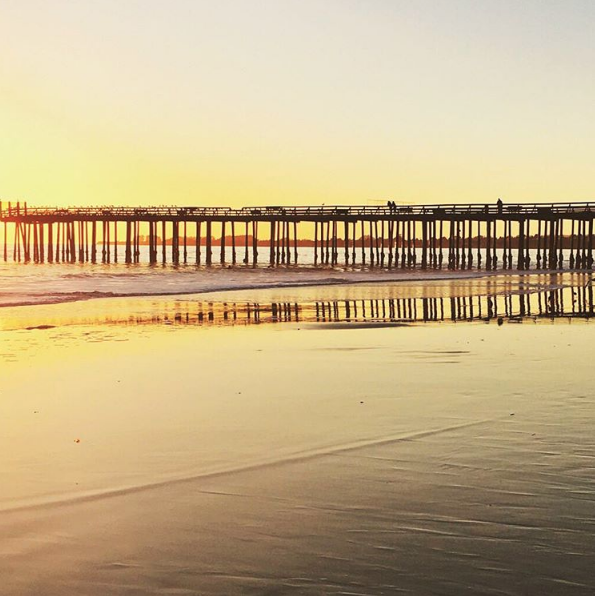 The favorite view at Seacliff State Beach is the pier built in 1930 stretching out to the final resting place of the the SS Palo Alto, a WWI-era concrete ship. The sinking ship (which took quite a hit in January 2017) was built as a tanker for the war but was only ever used as an amusement center, complete with a dance hall, casino, and heated swimming pool. At sunset, as the sun dips the ship into silhouette, you can almost picture the Palo Alto in its heyday with throngs of stylish men and women strolling down the 630-foot pier to drink, gamble, and dance out on the waters of the Monterey Bay. 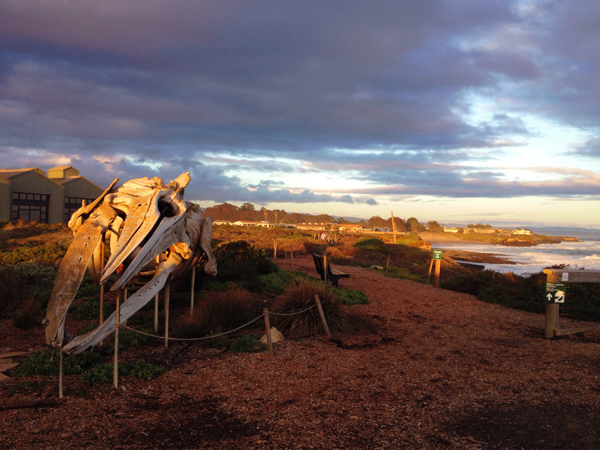 The public face of UC Santa Cruz’s Long Marine Lab, the Seymour Marine Discovery Center, sits atop ocean bluffs boasting native sage, yellow bush lupine, and coastal buckwheat. Cottontail rabbits cautiously hop in and out of the underbrush and great egrets and great blue herons hunt for mice and gophers in the surrounding fields. If you’re lucky, you might even see humpbacks breaching just offshore, or you can just admire the gray and blue whale skeletons in the orange evening light. 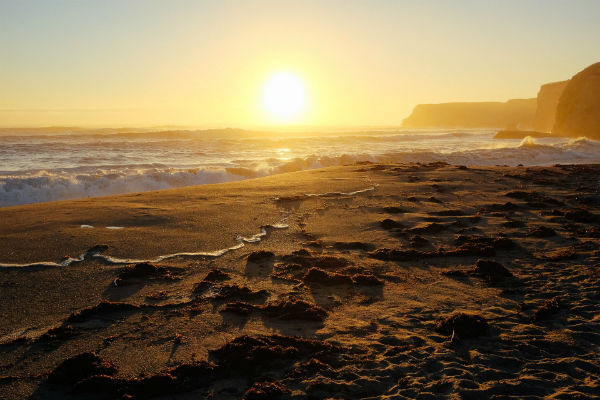 Just past the town of Davenport along scenic Highway 1, Davenport Landing Beach is easily accessible yet still offers more solitude than the beaches within Santa Cruz city limits. Watch the sun sink into the waves from the ocean-view swing-set or walk your dog along the edge of the surf as the day comes to a close. 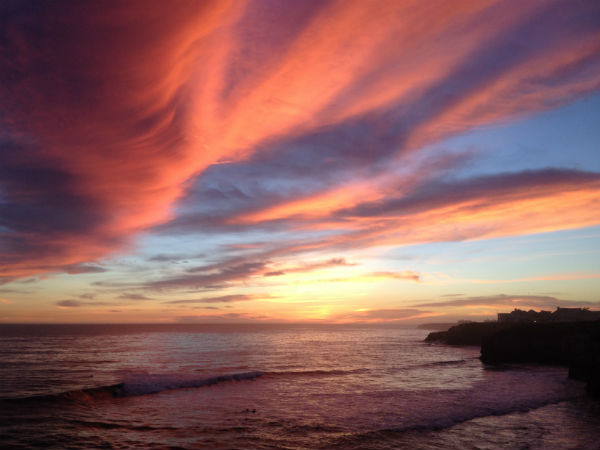 Enjoy the sunset on foot or bike along the paved path that stretches three breathtaking miles along West Cliff Drive. Take in striking ocean views as you pass by most of the Santa Cruz community from dog-walkers and joggers to surfers, hula-hoopers, and drummers. This is definitely a popular place to end a long day at work, but what it lacks in solitude, West Cliff more than makes up for in beauty. 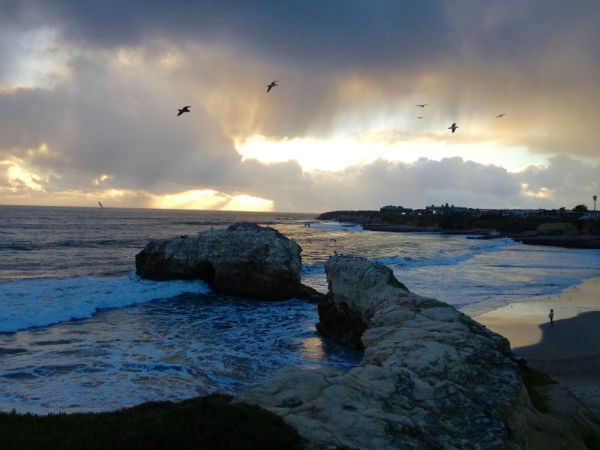 Three rock arches once stretched into the surf at Natural Bridges State Beach but the wind and waves have worn all but one away. You can get a partial view of the single remaining arch from the parking lot above the beach, but the best vantage point is down by the waves on the beach. Once accessible by walking (and at one time driving) from the parking lot at the end of West Cliff Drive, the natural arch is now a solitary island and a favorite resting spot for cormorants, pelicans, and gulls. 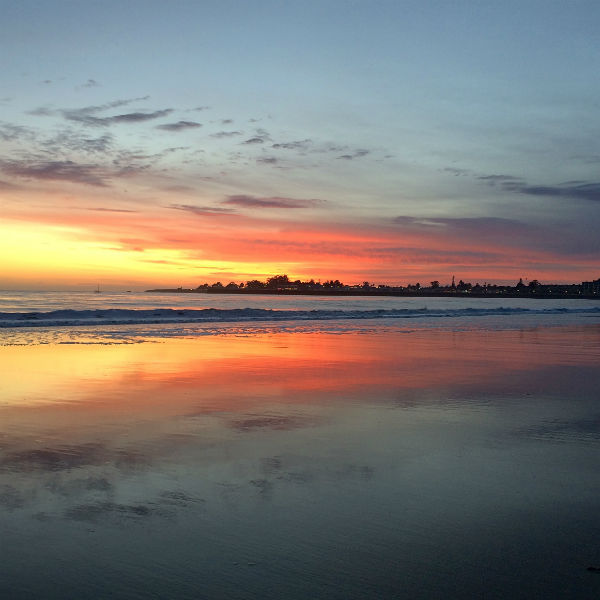 Sunsets never grow old at Seabright State Beach. With a view of two lighthouses, photographers can capture the sun setting over the Mark Abott Lighthouse past the Santa Cruz wharf and the moon rising over the picturesque Walton Lighthouse at the entrance to the harbor mouth. As the sun dips lower in the sky, the orange glow of a bonfire sparks into life at the far end of the beach and volleyball players pack up their nets and head home to dinner. Sailboats turn back towards shore and glide into the harbor, passing sea lions and otters on their way to the docks. 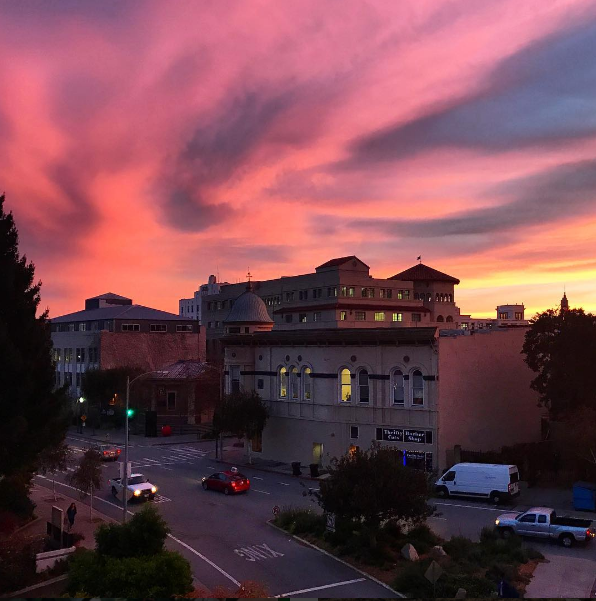 The sunset is always beautiful at the beach, but it can be downright spectacular from downtown too. The windows reflect the light turning the glass into flashes of gold and the city’s charming skyline comes sharply into view against the bright oranges, purples, and reds of a winter evening sky.

There are countless other incredible places to catch the sunset in Santa Cruz County. Did we miss your favorite? Let us know by tagging your best sunset shots on Instagram with @VisitSantaCruz and by using the hashtag #scwintersunset.