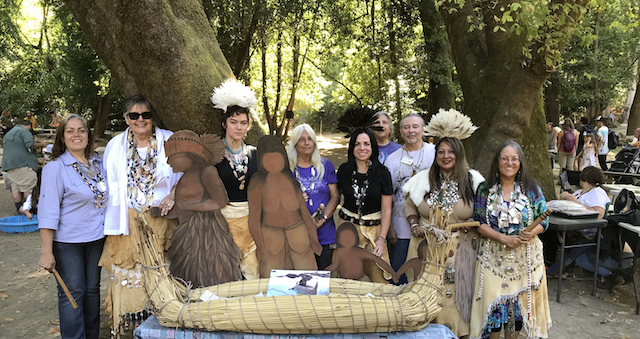 How the first inhabitants of northern Monterey Bay lived, and how their descendants are keeping tradition alive.

Long before European-style towns sprang up along the coastal plains and valleys of the Santa Cruz Mountains, another people lived here. Season by season they followed the rhythms of nature just as their ancestors had, treading well-worn paths between their traditional villages on the plain and their gathering grounds in the foothills and mountains.

Banded together in “tribelets” of several hundred people, their names ring familiar today: the Aptos of the southern Santa Cruz County coast; the Sokel of the inland valley now known as Soquel; the Sayanta of the San Lorenzo Valley, later called Rancho Zayante; the Cotoni (cho-toni) of Davenport, gateway to the Cotoni-Coast Dairies National Monument.

These tribelets, who shared a way of life but considered themselves quite separate from their neighbors (they spoke very different dialects), are part of a culturally distinct group of indigenous people called the Ohlone. In the mid-1700s, before European contact, the Ohlone numbered some 10,000 people inhabiting a vast swath of land stretching from San Francisco south to Big Sur and extending roughly 50 miles inland. They had already been here for millennia when the first Spaniards showed up; some of their shell mounds are 4,000 years old.

An Ohlone village was a grouping of domed structures made from willow poles with bunches of tule rushes for walls and a roof. Each house was between 6 and 20 feet in diameter, depending on the family’s needs, and a larger structure often stood in the village center for dances and gatherings. When a hut’s tule rushes got too soggy or became infested with insects, it was simply abandoned and a new one built.

Though villages were home base, people traveled to the hills and mountains to gather the all-important acorns each fall and to harvest grass and wildflower seeds in the spring. There were other harvests to attend to as well: hazelnuts, blackberries, gooseberries and huckleberries in summer, salmon runs and shellfish in the winter, the occasional windfall of a beached whale, and year-round hunting of waterfowl, rabbit and deer. But nothing came close to the acorns in importance.

Acorns from black oaks and tanoaks were the most delicious, those from live oaks the most widely available, those from valley oaks the hardest to split. Whatever the source, their shells needed to be cracked and their meat ground in a laborious process undertaken by the women. After that the meal had to be leached in up to 10 rinses of cold water until the tannic acid had washed out. Only then was it time to cook. If soup was on the menu, the women filled a specially woven watertight basket with water and meal and dropped hot rocks in to boil the soup, moving the rocks around so the basket wouldn’t burn. Sometimes they baked the meal into loaves of bread. Rich in protein, carbohydrates and fat, acorn meal formed a nutritious dietary base complemented by other foods as the season allowed.

When they weren’t gathering food or cooking, Ohlone women wove fine baskets for storage, cooking and eating, decorating them with shells and feathers. The men made boats for fishing from the same tule rushes that kept their homes warm and dry, bundling them into watertight, lightweight and ultimately disposable vessels that they plied with skill across the marshes and rivers. During their free time Ohlone of both genders played betting games, adorned themselves for dances, kept up on village gossip and taught their children how to be upstanding Ohlone citizens (put the tribelet’s needs before your own and take care of your relatives).

By all accounts the Ohlone—though they intermarried and traded with nearby tribelets—lived in a state of constant low-level tension with their neighbors, alert to territorial incursions or insults. But they were extremely hospitable to visitors, including the Spaniards. They can even be credited with the Spaniards’ successful “discovery” of San Francisco Bay, since the Quiroste tribelet of present-day San Mateo County nursed the lost and sickly men of the Portola expedition back to health in 1769, enabling them to continue on their journey to the Bay.

European contact, as is well documented, was not nearly as kind in return to the Ohlone people. They lost their traditions and lifeways at the missions, and enormous numbers of them perished from European diseases like smallpox and measles. The ones who survived the Mission era, which ended in 1834, blended into the dominant culture to avoid discrimination, intermarrying with Mexicans or Europeans, or else came together in impoverished, low-profile communities with other Ohlone. Their culture went underground, and the last native speaker died in 1935.

Today there is more hope than there was in those bleak decades. The Amah Mutsun Tribal Band, to which descendants of the Santa Cruz area Ohlone belong, is slowly reestablishing a presence in its ancestral homeland. Much of this has to do with the historic Ohlone use of fire to shape the landscape, burn off underbrush and prevent catastrophic wildfire—a traditional approach to land stewardship that is gaining serious attention from scientists and policymakers in wildfire-prone California.

Though it might seem as if the Ohlone lived passively off the fruits of a magnificent, benevolent wilderness, the truth that they were more like gardeners. They routinely burned grasslands—an important source of food from seeds—to stimulate reseeding the following spring. The tender young shoots attracted deer, another food source, and the regular burns kept the dense, highly flammable chaparral from taking over the meadows and posing fire danger. It seems the technique even allowed different plants to flourish than we see today; early Spaniard visitors report having seen hazelnut trees—rare in central California—in the middle of scorched meadows in the Quiroste territory.

In the spirit of learning more about these techniques, the Amah Mutsun have partnered with California State Parks archeologists and the University of California to establish the Quiroste Valley Cultural Preserve, a 225-acre parcel inside Ano Nuevo State Park, where tribal members and scientists are working to restore the land to its pre-contact state through pruning and controlled burns.

Just up the road from the city of Santa Cruz lies the Cotoni-Coast Dairies National Monument, established in 2017 as one of President Obama’s final acts in office. The Bureau of Land Management, which manages the land, has made an agreement with the Amah Mutsun to allow them access to the land to practice “Traditional Ecological Knowledge,” including ancient land stewardship techniques.

Even the language is making a comeback. Members of the Amah Mutsun are now learning their ancestral tongue; the effort got a boost from scholarship undertaken by linguist Marc Okrand in the 1970s. (Fun fact: Okrand created the fictional Klingon language for the Star Trek franchise, drawing upon his knowledge of Mutsun grammar to do so.) Meanwhile, dedicated individuals keep the other Ohlone arts—basketmaking, dancing and music—alive through practice and events like the annual Ohlone Day, held every September at Henry Cowell Redwoods State Park.

Though the world of the Ohlone has changed dramatically, it is clear that their descendants are finding a way not just to be part of the new world but to help lead it toward a better, maybe wiser, future.