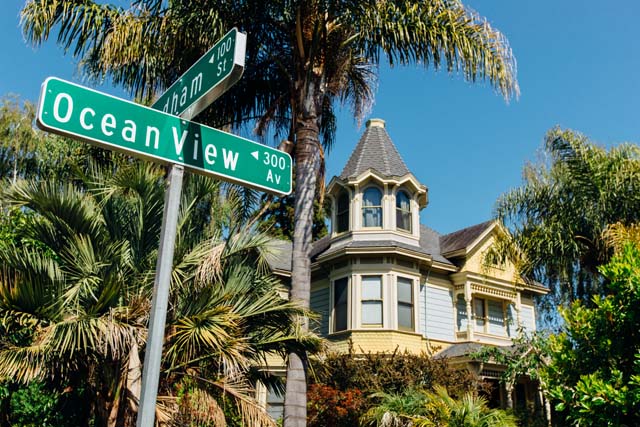 While Santa Cruz’s beaches and redwood groves may be well-known to visitors, the county’s less frequented side streets hide more than a few overlooked gems. Veer off the beaten path, and you’ll discover Insta-worthy homes and picturesque surroundings hidden within quiet, tree-shaded enclaves. Check out the following neighborhood walks which combine scenery, history, and a peaceful slice of Santa Cruz life that’s pleasantly removed from busy tourist hubs.

Who knew that a city renowned for beach bungalows and surf shacks would hold an abundance of breathtaking Victorians, often tucked between its majestic palms? Let these self-guided walking tours published by the City of Santa Cruz lead the way. Stray a few blocks from the boutiques of Downtown’s Pacific Avenue, and you’ll be immersed in the leafy, Victorian-strewn paradise that is Walnut Avenue. Likewise, wander a couple of blocks from the Santa Cruz Beach Boardwalk, and discover the magical mansions of Beach Hill which include Alfred Hitchcock’s inspiration for Psycho, and Instagram fave, “the door to nowhere.” Perhaps even lesser known is Ocean View Avenue, a romantic, vintage-tinged thoroughfare with grand Victorians rising above park-size lots with mature trees, blooming gardens, and white picket fences. Make a day of it by picking up baked goods from The Buttery, and capping your stroll at adjacent Ocean View Park which overlooks the Boardwalk and Monterey Bay.

The infinitely charming town of Capitola rewards exploration with Neapolitan ice-cream colored beach cottages, hidden walkways, and a lakeside home-turned-restaurant reached by a mini, hillside tram. While you may be familiar with Capitola Beach’s vibrant Venetian cottages and Shadowbrook restaurant—which is deserving of its own walking tour—there are many more sites hidden throughout the seaside village. Follow this illustrated walking tour which features notable structures—many bearing an iconic blue plaque awarded by Santa Cruz Museum of Art & History’s Historic Landmark Committee—and you’ll delight in finds such as The Windmill House (yes, with an actual windmill), the cute-as-a-button Pfister House, and oodles of secret pathways.

Renowned for its agricultural bounty and exceptional Mexican food, Downtown Watsonville is a treasure trove of striking architecture and fascinating tales from the city’s lengthy history. The atmospheric city center is crammed with ornate structures built during the turn of the 20th century including former hotels, theaters, and retail buildings that today sit on the National Register of Historic Places. Many buildings survived the destruction of the 1989 Loma Prieta earthquake thanks to William Weeks, a local architect who was committed to structurally sound buildings after he nearly perished in San Francisco’s 1906 quake. Plus, As buildings get repurposed, their origins and stories can become obscured, making them delightfully rewarding to rediscover. Highlights include the 19th-century Mansion House, the Art Deco-meets-Spanish Colonial Revival Fox Theater, and City Plaza which sits on a former Spanish era land grant. You’ll discover more structures and their histories with this walking tour guide published by the city, as well as this app-based guide created in commemoration of its recent 150th anniversary.