Earlier this year, Santa Cruz lost a beloved local legend. Jack O’Neill, the surf pioneer credited with developing the wetsuit and changing surfing forever, passed away on June 2, 2017 at age 94 in his home in Santa Cruz. With a full scraggly beard and black eye patch-the result of a surfing injury-the rakish O’Neill was a local icon, often seen cruising around town in his Jaguar and shouting out surfing tips to those surfing outside his cliffside house in Pleasure Point. Although best remembered for the international surf brand that bears his name, O’Neill was most proud of the Sea Odyssey program he founded to teach ocean stewardship to elementary students via sailing trips on the Monterey Bay. 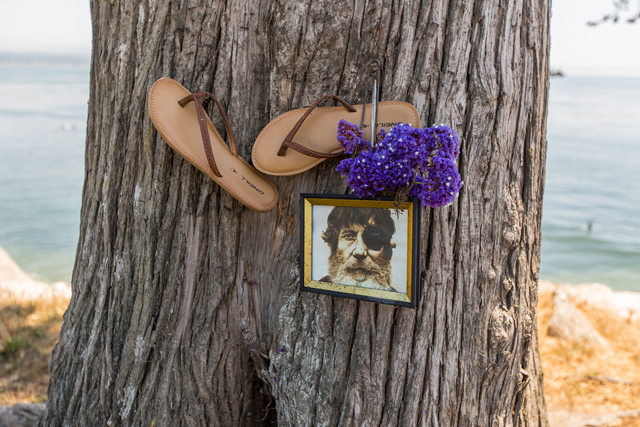 Upon his passing, the O’Neill family shared the following message:

“Surrounded by family, Jack was as soulful and encouraging as always, reiterating his love for his family, appreciation for a life well lived, his hopes for his friends and the oceans he loved, all within the familiarity of his oceanfront home of over 50 years, with the famous waves of his beloved Pleasure Point beach lapping at his deck.” 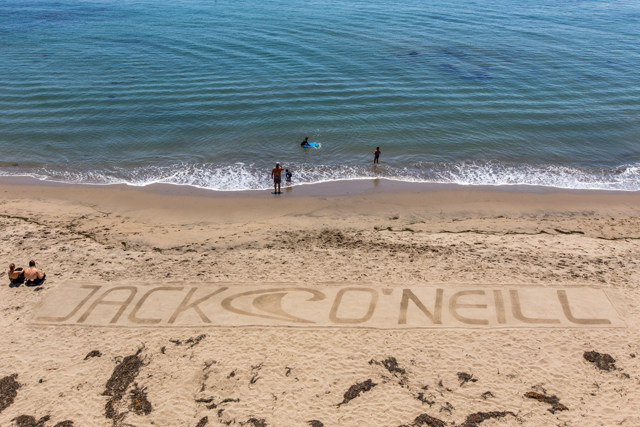 A native Coloradan who fell in love with the beach during a brief childhood stint in Southern California, O’Neill eventually moved to Ocean Beach in San Francisco during the 1950s. It was here that he not only opened his first surf shop-in a garage along the oceanfront Great Highway-but coined the phrase itself, eventually receiving a trademark for the term “surf shop.” Soon after, he moved his family to Santa Cruz and opened his second surf shop on the site of the current Dream Inn (the hotel honored this legacy by rechristening their bar the Jack O’Neill Lounge and contributing to an onsite mural that depicts the mid-century surf shop).

During this time, O’Neill was tinkering with a neoprene garment that would allow him to stay in chilly Northern California waters longer so he could surf more. His friends scoffed, but his creation of the first wetsuit would go on to revolutionize surfing and help foster the surf craze that boomed in the 1960s. His wetsuits also helped launch the international surf brand that exists today. While the O’Neill brand was sold in 2007, the O’Neill wetsuit brand remains family-owned, as do four O’Neill surf shops, three of which are located in Santa Cruz County. 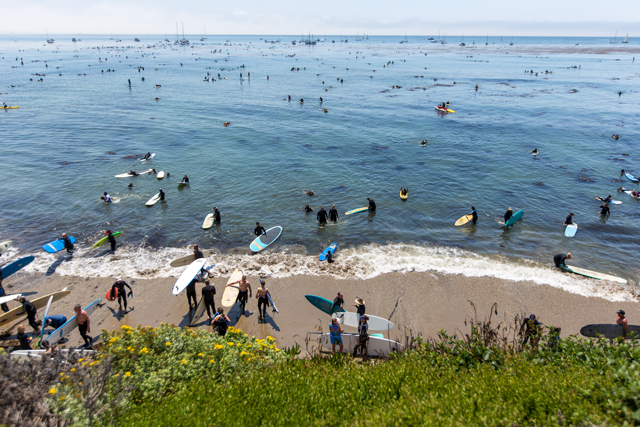 CLASSROOM ON THE BAY

In 1996, O’Neill founded the O’Neill Sea Odyssey, a non-profit program that imparts ocean stewardship to 4th – 6th grade students from schools throughout Central California. Students board O’Neill’s 65-foot catamaran and sail out on the Monterey Bay National Marine Sanctuary where they participate in hands-on lessons on marine habitats. The program has served 100,000 students to date, and O’Neill referred to it as his proudest achievement. 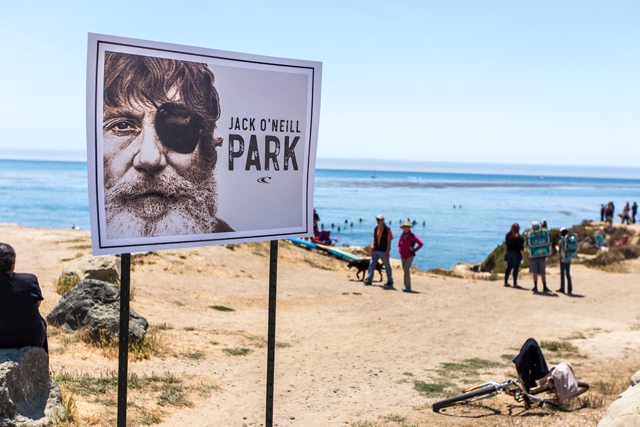 On the morning of Sunday, July 9th, 2017, thousands gathered along the Monterey Bay to pay tribute to O’Neill with a memorial paddle-out, a beautiful surfing tradition where participants form a floating circle in the ocean to honor a fellow surfer or ocean enthusiast. Pleasure Point’s waterfront East Cliff Drive-the site of O’Neill’s waterfront residence-was filled with a lively mix of well wishers, children with tribute eye patches, and surfers balancing colorful boards atop their heads. The wooden fence surrounding O’Neill’s house was adorned with many momentos, flower leis, and makeshift altars.

After lining up to receive sprigs of white orchids, thousands of wetsuit-clad surfers bellied up on their boards and paddled out into the gentle surf while thousands of cliffside spectators looked on. To mark the start of the ceremony, a Coast Guard helicopter swooped overhead, and fellow surfers aboard the O’Neill catamaran began sharing stories about Jack via loudspeakers. Afterward, the waterborne surfers who formed a sprawling circle around O’Neill’s boat tossed orchids into the sea and began enthusiastically splashing the water. It was a touching display of community affection for the late O’Neill as boat horns blared and spectators back on land whooped cheers of support. 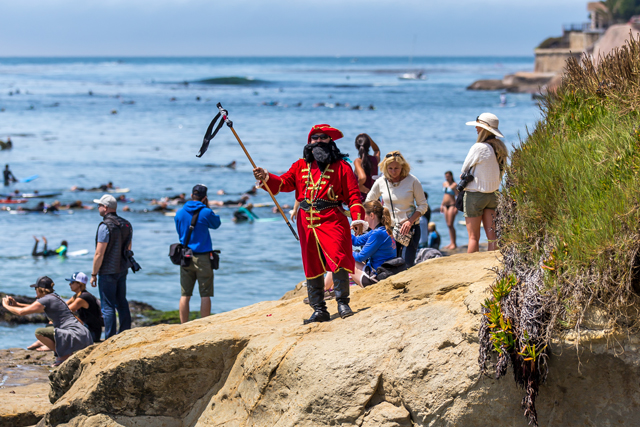 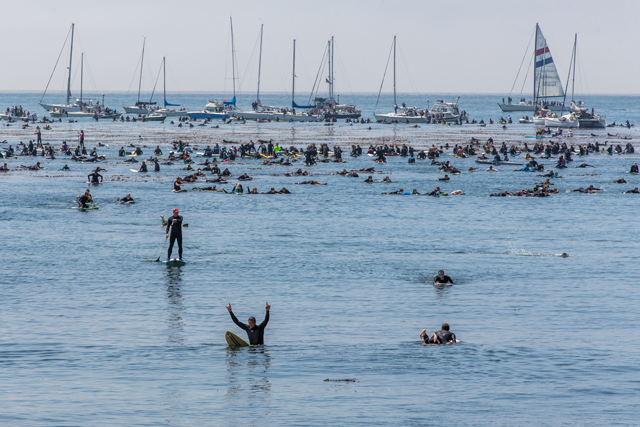 In honor of O’Neill’s many contributions to surfing, the local community, and the wellbeing of oceans, The City of Santa Cruz declared July 9th to be “Jack O’Neill Day,” and redubbed the lot adjacent to his home Jack O’Neill Park.

As his family notes, “For nearly his entire life Jack lived by and for the world’s oceans, and worked tirelessly to promote public access to their many health, economic and environmental benefits. He was very concerned, for example, with the health of waters at area beaches.”

Today, visitors can explore those same waters that O’Neill devoted himself toward aboard the Team O’Neill catamaran which offers public cruises on the Monterey Bay (check the O’Neill Yacht Charters site for dates, times, and reservations). If you’d like to continue Jack O’Neill’s support of healthy oceans, the O’Neill family suggests that any memorial contributions can be sent to the O’Neill Sea Odyssey. 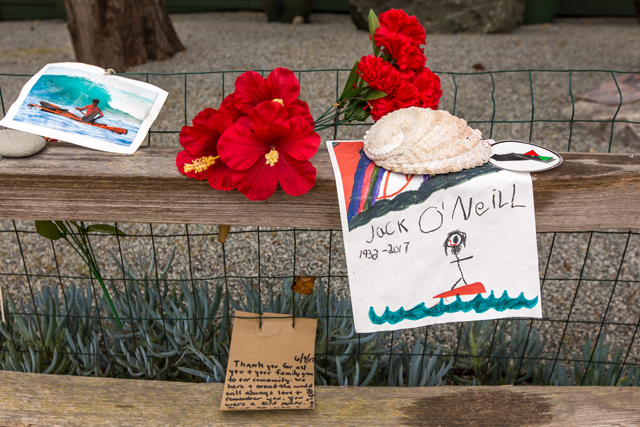