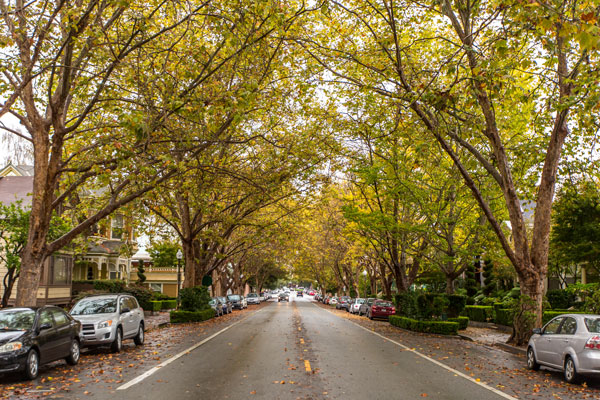 Lined with grand Victorian homes, vintage streetlamps, and a wondrous tree canopy, Walnut Avenue in downtown Santa Cruz is a visual treat any time of year. Yet come fall, when leaves are set ablaze with vibrant fall colors, it’s absolutely magical. The next time you’re enjoying downtown’s shops, eateries, or farmer’s market, stray two blocks from from the main drag and you’ll be treated to one of the most enchanting streets in Santa Cruz.

Walnut Avenue is notable for being the first residential street in downtown Santa Cruz. Residents have discovered moonshine bottles, rolls of 19th century wallpaper, and hand-forged nails hidden in walls and unearthed during renovations. Thanks to these magnificent homes, the stretch of Walnut between Chestnut and Center streets feels like stepping back in time. If it weren’t for the cars, you wouldn’t know what era you were in.

HISTORIC HOMES THAT TELL A STORY

You needn’t be an architectural buff to be charmed by Walnut Avenue’s ornately-detailed, restored Victorian homes. The term Victorian is actually a catch-all to describe a variety of styles-Stick-Eastlake, Queen Anne, Italianate-that were popular in the late 1800s and are spotted along Walnut Avenue. Don’t know your cornices from your balustrades? Check out this brochure produced by the City of Santa Cruz. It lends a quick overview of the architectural styles and details that grace Walnut Avenue.

As you admire the homes, look closely and you’ll notice blue, oval plaques adorning many of the facades. Each one notes a tidbit of information about the historic home. The plaques are part of a program of the Santa Cruz Museum of Art & History (MAH) to honor historically and architecturally significant structures throughout Santa Cruz County. (In fact, the West Cliff Inn is an historical property that is also a B&B.) Marla Novo, who manages the museum’s collections, says she loves walking down Walnut Avenue. “It’s a treasure of structures that house stories about our community’s history,” she says. “The MAH’s Historic Landmark program aims to share these stories, connecting us with our past and each other.”

Here are a few noteworthy homes that bear the blue plaque:

219 Walnut: Dramatic, pink-hued shingles make this grand Queen Anne hard to miss. It was built in 1895 for Carl E. Lindsay, the District Attorney of Santa Cruz at the time.

241 Walnut: Prominent Santa Cruz contractor Lewis McCornick, who worked on the nearby high school, built this cottage-like home in 1877 as a Christmas Day anniversary gift for his wife Maggie.

234 Walnut: This wildly impressive Stick Eastlake home is noted as the John G Tanner Love Nest and a gift to his bride Mollie Bowen. Don’t miss the ornate archway that frames the adjacent driveway.

240 & 244 Walnut: This delightful pair of Queen Annes form the cutest house twinsies in town. Note the flickering gas lamp that illuminates the front porch of 244.

A KALEIDOSCOPE OF FALL COLORS

Walnut Avenue is one of only two thoroughfares in Santa Cruz that sport a brilliant, leafy canopy (you’ll find the other on Catalpa Street in Midtown). In autumn, the variety of mature trees turns the skyline and sidewalks into a kaleidoscope of fall colors.

For a little background on these trees, we tapped Leslie Keedy, the City of Santa Cruz’s Urban Forester. Yep, that’s a real job title, and Leslie explained that residents in the 1970s planted many of Walnut’s trees specifically to create a canopy. Did you know that in addition to adding beauty to neighborhood streets, tree canopies are credited with slowing traffic and discouraging crime? These residents chose the London Plane, a relative of the American Sycamore and identifiable by its multi-hued bark that resembles a blotchy camouflage pattern. Thanks to being fast-growing and bullet-proof in urban environs, the London Plane is the most frequently planted tree in California. Stroll Walnut and you’ll also see vibrant Liquidamber, an impressive century-old Bunya Bunya tree (northwest corner of Walnut & Chestnut), and a spectacular Gingko that turns a shock of yellow in fall.

While photos hint at Walnut Avenue’s beauty, nothing compares to exploring it in person. The City of Santa Cruz produces an informative brochure that will guide you to Walnut’s significant homes and lend a good intro to its architectural significance. Want more self-guided walking tours? Check out Self-Guided Walking Tours in Santa Cruz County for gorgeous and interesting architecture and neighborhoods throughout the county.