But while Santa Cruz has long been legendary among longtime surfers, few people know that it’s also the best place on the West Coast to learn to surf. If you’ve ever wanted to feel the rush of riding a wave, Santa Cruz is the place to try it. Cowell Beach next to the Santa Cruz Municipal Wharf and Capitola Beach are two of the best places to learn to surf. Surf instructors like Club Edand Richard Schmidt Surf School provide wetsuits and surfboards and get you up on the waves. Once you’re ready, grab your big stick and head to one of Santa Cruz County’s mellow beaches.

Each fall, the O’Neill Coldwater Classic, takes place in Santa Cruz, on of surfing’s signature events.  In 2012, the event was elevated to an elite Association of Surfing Professionals (ASP) World Title surfing event. Santa Cruz was the tenth of eleven tour stops and thousands of surf aficionados cheered on the world’s best surfers at Santa Cruz’s historic Steamer Lane on West Cliff Drive.

For die-hard surf lovers with a taste for nostalgia, the Annual Longboard Club Invitational, the oldest and longest-running surfing event on the west coast happens each Memorial Day Weekend.

Finally, Northern California’s largest woodie show features dozens of classic “surf mobiles” from all over the West Coast. Take a cruise down memory lane at the annual Surf City Classic: Woodies on the Wharf, in June. In the early 50’s, woodies were a cheap mode of transport for surfers who would take out the middle and back of the cars to load surfboards. This event features more than 150 stylish, pre-1952, wood-bodied cars showcased all along the Santa Cruz Wharf. 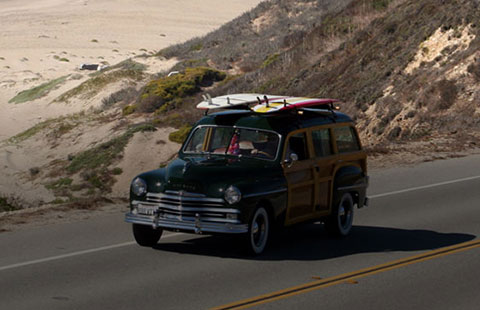